Can we not just agree that Sunday was an incredible day for women’s sport and leave it at that?

Turns out we can’t.

On Sunday, Adelaide Oval hosted the biggest crowd ever to attend a stand-alone women’s sporting event in Australia, when more than 53,000 people saw the Adelaide Crows claim their second AFLW premiership with a comprehensive win over Carlton.

The gigantic crowd – double the expected attendance – made headlines around the nation along with the dominant performance of Chelsea Randall, Erin Phillips and the Crows women.

Yet some detractors found it necessary to try to bring the occasion down.

The Sydney radio host started with an Adelaide jibe: “There’s not much to do in Adelaide on a Sunday afternoon.”

Then he got down to business.

“Do you have any idea what that vision, what those optics mean to young girls?”

With 53,034 people flocking to watch the #AFLWGF live, the panel discuss what this means for both society and the league as it continues to grow in popularity #TheProjectTV pic.twitter.com/dPLEmMhOW8

“I’ve got two daughters and I love sport but let’s not go overboard, it was free. How many people would have been there if they’d charged? Why don’t they charge?

“I don’t have a problem with them playing I just don’t like watching it because I don’t think it’s very good.

“You can’t change my mind on something that I’ve been strong on for all of time. I don’t like it.”

The comebacks were swift on The Project panel.

Lisa Wilkinson told him “Do you have any idea what those optics mean to young girls?

“It’s all about building the sport after centuries of women being told ‘no you sit and watch the men’.”

Waleed Aly said that Price refused to eat humble pie about the success of the AFLW grand final because “there’s no woman who’ll bake it for him”.

Peter Helliar said that Price could change his mind because “you can evolve, that’s what we do as people”.

But perhaps the best comebacks of all came on Mix102.3 on Tuesday morning when passionate women’s sport advocate Jodie Oddy stepped up to the plate.

“He’s entitled to not like it, if that’s not his cup of tea then don’t watch it,” Jodie said. “But don’t berate it and put it down.

“His radio station is free to listen to, does that make his show any less important? It’s a ridiculous argument.

“Sunday at the Oval was a historic day for women’s footy and the man just cannot give the girls the little bit of respect and credit they deserved on Sunday. 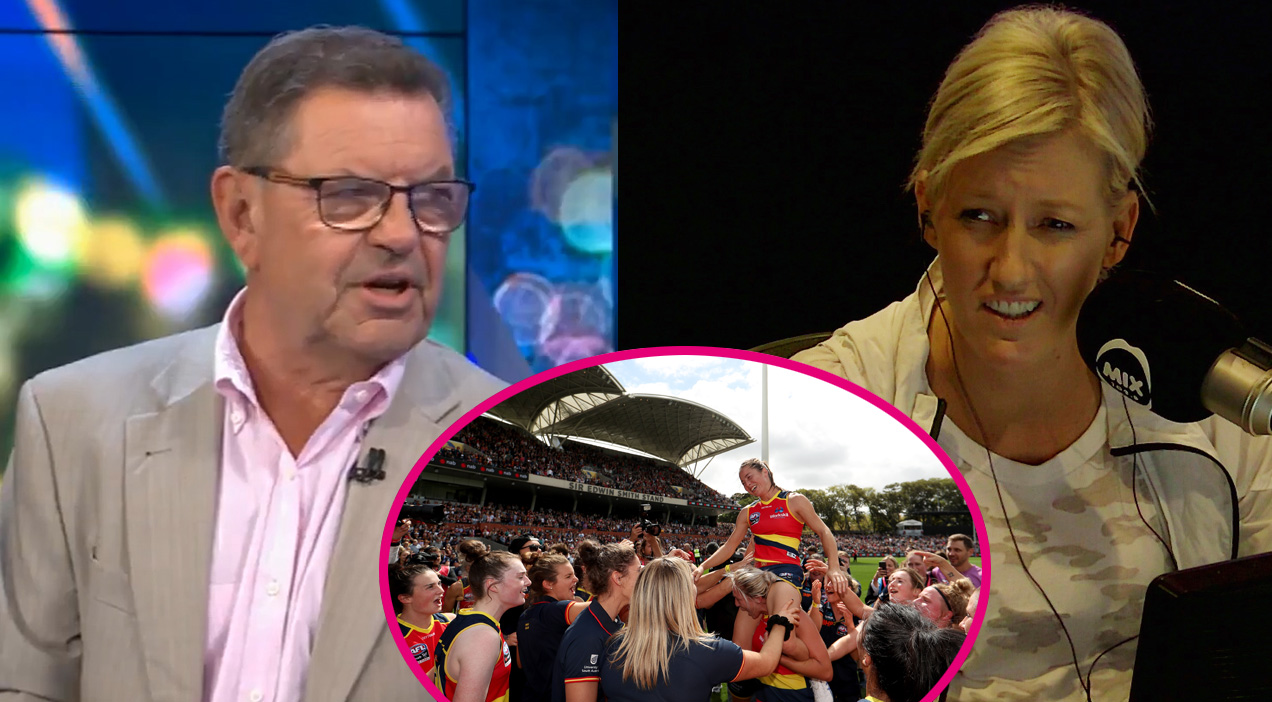 “It was free but 53,000 people still chose to turn up and watch it and spend their afternoon with their children watching a fantastic spectacle.

“A lot of men are using the ‘it was free’ argument. What those men do not understand is that they have always been afforded the privilege of playing whatever bloody sport they wanted to their whole lives. Women haven’t. But they got to do that on Sunday in front of a massive crowd and they got to live their dream.”

Jodie was ably supported by co-host Mark Soderstrom who told the story of when he first got the call-up to commentate the AFLW on Channel 7.

“I thought how’s this going to go,” Soda said of his first reaction. “Are we trying to impose women’s football just for equality on to people? I just wasn’t sure how it was going to go. And I have gotta say I love it.

“I have a three-year-old daughter and I hope she plays football.

“My niece is 14, she’s in Melbourne, and I flew her over on the weekend to watch the football because she loves playing her footy now and I wanted her to get inspired by watching these girls and seeing what they can achieve by setting their mind on a goal.

“I can proudly say right now I am a huge fan of it.