And we don’t mean on the football field.

Boak has been single for a lot of his 13-season AFL career and right now he says he is more single than ever with no suitors whatsoever.

It seems hard to believe, but that’s definitely what he said – just watch the video above.

When Soda told him that ‘Lord of the Dance’ Michael Flatley needed to have sex as soon as he gets off stage, Boak told him that had never happened to him after a game of footy, “but I’m struggling so…”

Boak is also refusing to join online dating apps like Tinder, telling Jodie and Soda this morning he was a “bit old”.

Soda told him it was time to get himself on Tinder with a photo wearing just his Rogers jocks, which is his underwear label.

“I’m nearly at that level at the moment, it’s that bad,” Boak replied.

So to help out, we thought we’d mock up what it might look like if Trav does decide to go shirtless on Tinder… 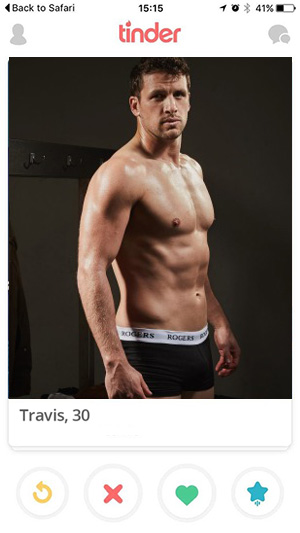 If you think you’d swipe right, let us know because Soda promised he would find him a date for this Saturday night.

When Joel Creasey treated a twisted testicle with tiger balm

Jodie and Soda rescue Kerry from Eudunda after search