Well this is NOT our favourite way to get extra protein…

It seems like the rest of us will be double checking our veggies on the next shop, after an Adelaide woman has made a disgusting find in her produce.

The woman posted a photo to Facebook of a large dead caterpillar which was resting on a leaf of her baby broccoli. 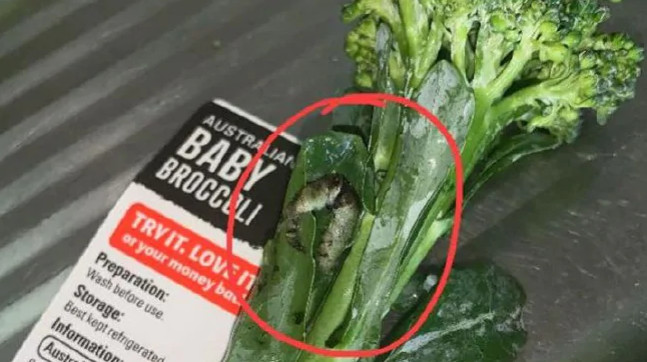 Her caption read, “Coles this is absolutely disgusting.”

“Do y’all have a habit of including dead caterpillars with your baby broccoli bunches?”

Many others expressed their shock and disgust in the comments, but some argued that the find was better than eating produce that was “drenched in toxic pesticide chemicals”.

“It’s grown in nature. I would prefer that than a bunch of pesticides and chemicals used to keep the veg (sic) ‘clean’,” one wrote.

The Coles customer representative responded to the original post, asking the woman to get in touch with a direct message.

A Cole spokesperson told news.com.au that they will be investigating the matter.

This Aussie Brand Is Charging More For Plus Size Garments

Why Are Strangers Are Leaving Notes In This Letterbox?

What You Need to Know About Returning Unwanted Xmas Presents