When Soda rocked up to work on Monday morning, he was sporting a shiner that made him look as if he had walked straight out of a front bar brawl and into the studio.

He looked a little rough.

So you would assume that there was an incredibly tough reason behind the black eye, right…nah.

The person responsible for the shiner, was one of Soda’s kids. More specifically, Soda’s three-year-old Otis.

“He is the tough guy of the family, there is absolutely no doubt about this,” Soda told Jodie.

“Now, this kid at three years of age holds a permanent sneer on his face. And this kid doesn’t walk, he struts. And when he struts, he does it with his fists clenched.

“And he does it that way because he’s the youngest, he’s always prepared, and he’s a bit like a coiled spring. He’s just ready to go, just in case one of his older sibling, Felix or Sienna is going to attack him. So he’s just waiting to pounce.”

We feel like Soda may be trying to make Otis sound a little tougher than he actually is here.

Remember, he is three…

“He’s so tough that this week when he went to get his flu jab, unlike his other brother and sister, the other ones who bawled their eyes out. There were no tears at all.

“In fact, he looked the nurse, Kate, right in the eye. And as she plunged the needle into his shoulder, he smiled at her. And I’ve just gone ‘what a great, little champion.” 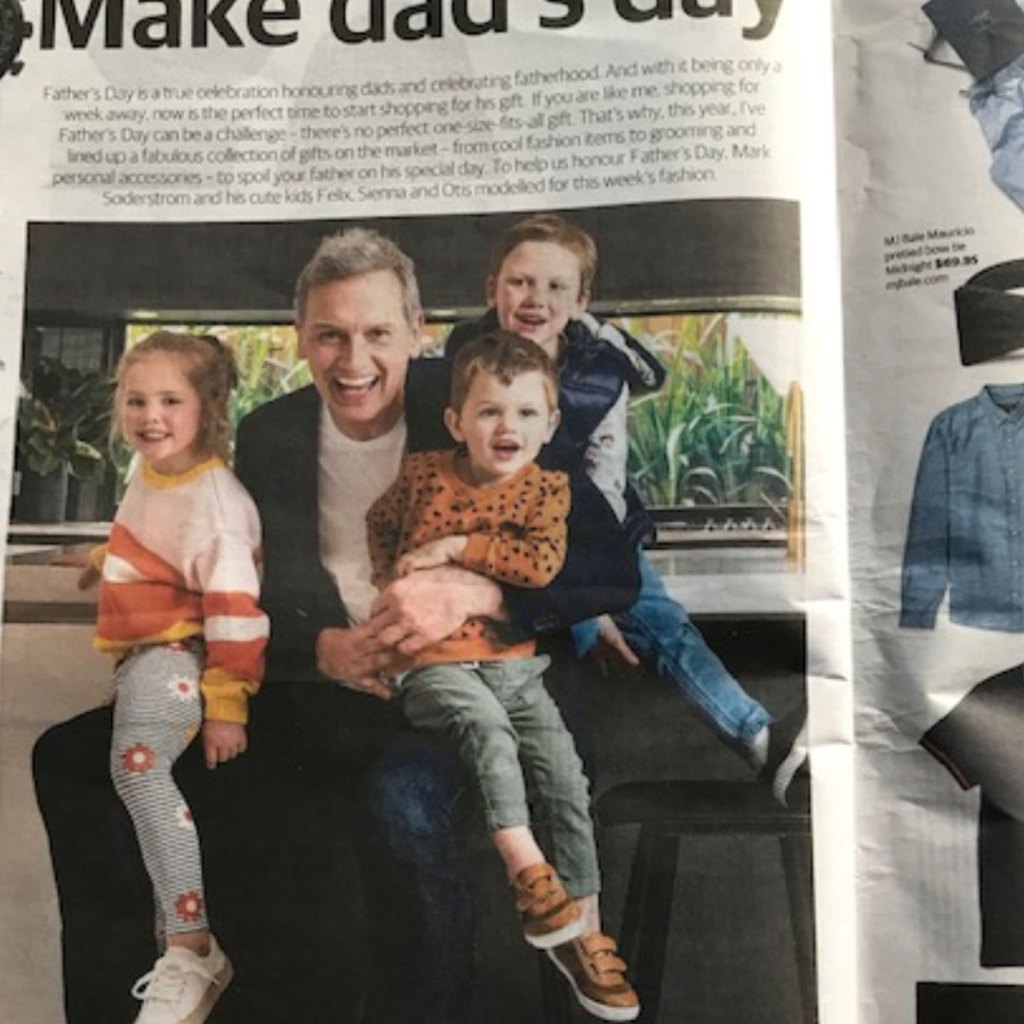 Soda with his purportedly tough son, Otis along with Sienna and Felix

“Anyway, so Sunday morning…I’m lying in bed…and you know when you’re lying in bed and you can hear your kids running down the passage. And you can tell by the footsteps which kid it is, by their gait,” Soda continues.

“When I hear Otis coming down, it’s like a bruiser, very heavy-footed. So I know he’s coming down, right? So, he’s come down and he jumps in my bed, and every time he goes ‘Hello, my little darling,’ that’s how he greets me.

“And then he proceeds to jump up and down on me. And then, what’s happened on Sunday morning, hence this black eye is after he jumped up and down on me used me as a trampoline going: ‘Hello, my little darling.’ He’s got me in a headlock and the hard part of his head has got me flush in my eye socket.”

The thing is, Otis wasn’t exactly remorseful about the accident. Every time dad walks past now, Otis is filled with glee.

Still, it does sound like Soda wants you to forget that he got a black eye from a three-year-old.

Listen to Soda tell the story about his black eye here:

A Reading From Jodie's Quarantine Diary Reveals A Moment Of Realisation

####! What Made Soda Drop The F-Bomb On Air To Hamish Blake?

"I Think It's Going To Be Very Moving", Trumpeter James Morrison On Awesome Anzac Day Initiative