Our very own Erin Phillips has announced this morning that she has brewed a new beer in conjunction with Pirate Life and The District at SkyCity. The beer, rightly named ‘Strong Blonde’, is being released ahead of International Women’s Day on Monday. 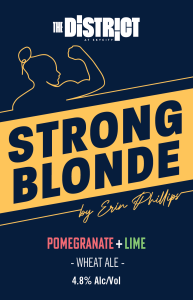 The Logo designed by Pirate Life and Kate Vallance

“It celebrates strong women in our lives and community and this is a unique collaboration to do this. There’s a bit of a stereotype that beer is just a man’s drink so I wanted to do something for women because there are plenty of female beer drinkers out there.”

Erin is beyond proud to have her name on the first female beer. Erin has described the pomegranate and lime flavours are crisp, subtle and fresh. The name Strong Blonde was inspired by something that represents women and the Blonde colour compliments Erin’s notable hair.

The logo captures Erin’s outline with her poignant bun that she dons during her AFLW games and her arm in a celebratory fist that she often shows when she slots goals. Even for non-beer drinkers, this one might take your fancy as it isn’t a hardcore beer flavour, it is more crisp and refreshing – perfect after a game of AFL.

On Monday night, Erin and Soda will be hosting ‘Erin and Soda’s Shout’ at The District at SkyCity to celebrate Strong Blonde. Listen to Mix102.3 for your chance to come along, join the celebration and taste a frothy Strong Blonde that goes down a treat.

Have a listen to what Erin and Soda said this morning on the show.

Want more? Listen to one of our favourite moments from Erin Phillips & Soda – Tune in weekdays from 6AM on Mix102.3!
beer erin phillips international women's day pirate life strong blonde

We Had An Amazing Acappella Performance By Gospo Collective

Well It's Been Decided, Erin's A Better Magician Than Soda

Soda Was Forced To Stop A Wedding