With all the focus on our obesity epidemic – especially in our children – is it time to make a stand against supermarkets and their chocolate ‘guard of honour’?

On Friday morning, Louise – one of Jodie and Soda’s FOTS (Friends Of The Show) – submitted the above photo to the FOTS Facebook group, with a concerned message about the supermarket’s choice to build a “Cadbury guard of honour”.

She quickly had a lot of support from other parents, some saying there are certain supermarkets they refuse to go to when they have their children with them.

Louise said there was no possible way to avoid standing in front of the endless packages of chocolates as it was placed where customers line up to get to the checkout.

Some ask nicely, some throw tantrums, some sneak the chocolate into the trolley when parents aren’t looking.

But it all happens because the chocolate is right there in front of them.

Louise said she chased her daughter more than 15 times yesterday to take chocolate out of her hand. 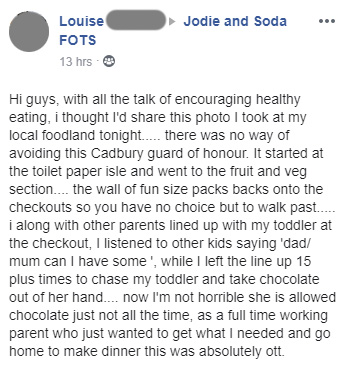 “I along with other parents lined up with my toddler at the checkout, I listened to other kids saying ‘dad/mum can I have some’, while I left the line up 15 plus times to chase my toddler and take chocolate out of her hand,” Louise explained.

“As a full-time working parent who just wanted to get what I needed and go home to make dinner this was absolutely ott (over the top).”

Another commenter agreed, saying “kids will put on a tantrum to embarrass you so you give in.”

Dee had a more serious reason for avoiding supermarkets and their chocolate walls.

“I avoid going there because of this and other shops that do this. I hate the chocolate guard of honour especially when one child isn’t able to have it for medical reasons,” Dee wrote.

But not everyone was sympathetic to the parents.

“It’s called self control people! And also the word NO. You know we used to say that to our children years ago,” wrote Nancy.

So why do supermarkets do this? There might be more to it than just hoping kids will convince parents to buy them more chocolate.

Another of Jodie and Soda’s FOTS, Emma, offered an insight.

“I work in the retail industry and as people are not aware there are so many terms and conditions associated with promotions and products. And prizes for best and biggest displays. It is actually the company that’s responsible (In this case, Cadbury), not so much the supermarket. The companies pay big dollars to have their range on display in “prime position”.”

Either way, it doesn’t make shopping much fun. Even for the adults without kids, as Sue pointed out.

“I don’t know about teasing the kids with all the displays……I’m probably worse, especially if I’m shopping on my own and there is no-one to stop me buying them all 🤣🤣”

Want more? Listen to one of our favourite moments from Erin Phillips & Soda – Tune in weekdays from 6AM on Mix102.3!
adelaide cadbury supermarket