When you think of the Fringe, what do you think it would taste like? Well, this is what the super popular gelato and ice-cream brand asked its followers and had them vote for the gelato of their dreams.

With a huge amount of flavour submissions including caramelised popcorn, peanut butter Nutella swirl, cinnamon donuts, coco pops, margarita and lemon meringue pie, the St Louis team had a lot to work with.

The new limited-edition gelato flavour is… 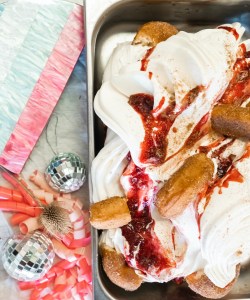 With fresh strawberry jam, fragranced cinnamon and chunks of donut, the Fringe-inspired flavour puts a tasteful twist on a childhood favourite.

Posted on their Facebook, the St Louis team said “You asked and we made your gelato dreams come true – our #FringeFeverFlavour Jam Donut is in store TODAY!

⁠ ⁠Made right here in #Adelaide & approved by our pals Gospo Collective this flavour has been made with fresh strawberry jam, cinnamon and huge chunks of donut!

It’s a flavour party & everyone is invited!

There are limited quantities of the drool-worthy jam donut flavour, so head into stores across Adelaide and grab yourself a scoop…or three.