How does this keep happening?! Why does it seem like Sydney is full of poo joggers?!

Like we get it, everyone’s out jogging more due to gyms being closed, but WHY is the foul part of the act happening?!

Just over half a year since Roxy Jacenko’s business in Paddington became the target of a mystery poo-jogger, another one appears to have surfaced in Marrickville in Sydney’s inner west.

The disgusting scandal has come to light after one resident put up a rather angry note, accusing a mystery poo-er of leaving human faeces ion their property in front of their garage. A picture of the note was then posted to Reddit.

The note was put up on a property on Silver Lane in Marrickville, warning the apparent poo jogger that they have installed security like a fence and a camera to catch them if they keep using the garage as their personal toilet.

The note was quite polite really, given the circumstances, but they did say that if it happened again they would hand the evidence over to the police.

“We have installed this fence and a camera to hand over to the police.

“We understand that COVID-19 is tough on everyone but please stop sh*tting on our garage.” 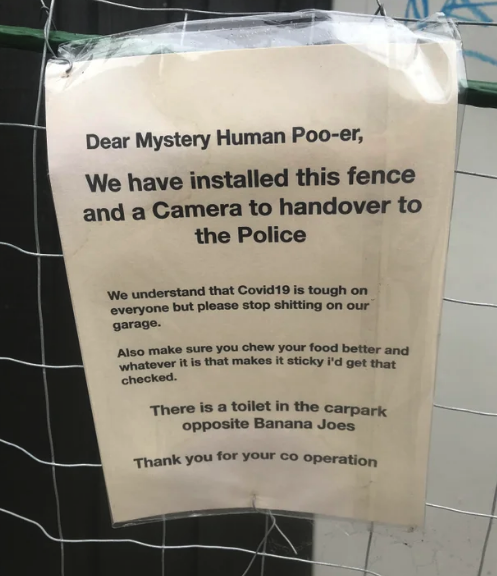 The resident then advised the person to possibly get a check up with their doctor after observing the faeces (disgusting!) and then even gave directions to the nearest toilet.

“Also make sure you chew your food better and whatever it is that makes it sticky I’d get that checked.

“There is a toilet in the carapace opposite Banana Joes. Thank you of your co-operation.”

The post has obviously gained a lot of attention on Reddit, with people debating why on earth someone would deficate on someone’s property.

“I’m curious why people sh*t in public, have they been caught short? Did they misjudge how their stomach felt before they left to go about their daily business? How do they wipe?” asked one used.

Let’s just hope the stern note and the added security gets the mystery poo-jogger to stop!