If you’ve ever wanted to use the excuse ‘I was late to work because there was a bull on the bridge’, well it’s actually happened.

This morning at around 9:30am a bull broke out of its trailer and made its way across Murray Bridge’s old road, causing traffic chaos and sending people fleeing.

According to Murray Bridge News, the livestock’s transporter was on its tail, chasing the bull across the bridge and trying to avoid traffic.

After assistance from the police, the bull was eventually steered 3km to the showgrounds, taking another hour for two stockmen to navigate it into a trailer. 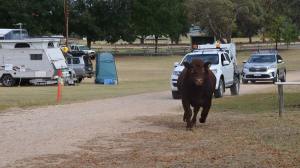 Trudy Robinson, a witness of the bizarre event said,

“It basically demolished the tailgate of the trailer.”

“It got out behind the court, on Railway Terrace, and ended up going over the bridge.

“They’re at the showgrounds now (at 9:45am) … they’re getting some panels and trying to set up an area to catch the bull,” she said.

Amid the chaos, the bull dented a gate and bumped into a camper van but thankfully no one was hurt. 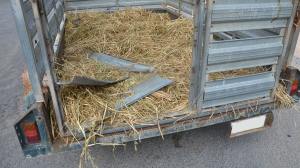 Want more? Listen to one of our favourite moments from Erin Phillips & Soda – Tune in weekdays from 6AM on Mix102.3!
adelaide south australia