When SA’s Governor, Hieu Van Le, offered his backyard at Government House for the match we knew it was going to be big.

But we could have hardly imagined that the South Australian community would come together in such an overwhelming way to support our two chosen charities – Childhood Cancer Association and Canteen.

Captaining each side will be two young lads who have had experiences with cancer that we wouldn’t wish on anyone.

Leo Bawden, 14, will team up with Mix102.3’s Jess Adamson to take charge of the Canteen side. Leo himself overcame brain cancer as a child and receives ongoing support from Canteen.

Sponsors came on board for each team and will cover all costs of team uniforms and equipment, and donate funds to the charities based on the number of four and sixes hit in the game. Sam Shahin gave us a call to say OTR Give would support the Canteen side, while Darren Thomas was listening and decided Thomas Farms would support the Childhood Cancer Association side.

The bookies would have Jess and Leo’s Canteen team at slight favouritism to win the match and take home the Golden Sprinkler Trophy, largely because they hold the only current cricketer in the side – Strikers WBBL superstar Sophie Devine.

Both sides have two retired cricketers.

We’ll have to see how well those four are moving these days, especially given the controversial backyard cricket rule, ‘tippy go’ will be in place!

We know you are ‘super excited’ because @JessAdamson7 took this photo of you standing on the desk when you got the news!🤪🤩 pic.twitter.com/n9Mju030X5

Soda and Jesse could be confident that Power star Travis Boak will more than hold his own with the bat given he played cricket at a high level as a junior but what each team gets from its remaining players is very much unknown.

For the Canteen team, master recruiter and big Crows fan Jess Adamson has gone for two former Crows players – Tony Modra and Wayne ‘The Weed’ Weidemann, while also using the services of the most influential man in the state, Premier Steven Marshall.

Crows AFLW star Chelsea Randall was locked in to play as well but had to pull out when she ruptured her ACL at training earlier in the week.

None other than long-time Adelaide Oval curator Les Burdett will spend his Wednesday preparing the backyard pitch in the immaculate Government House on the corner of North Terrace and King William St.

Attendance at the game is by invite only but Jess and Soda will be broadcasting live from Government House on the Mix102.3 breakfast show tomorrow, and you’ll be able to follow the action via Facebook live on the Mix102.3 Facebook page. 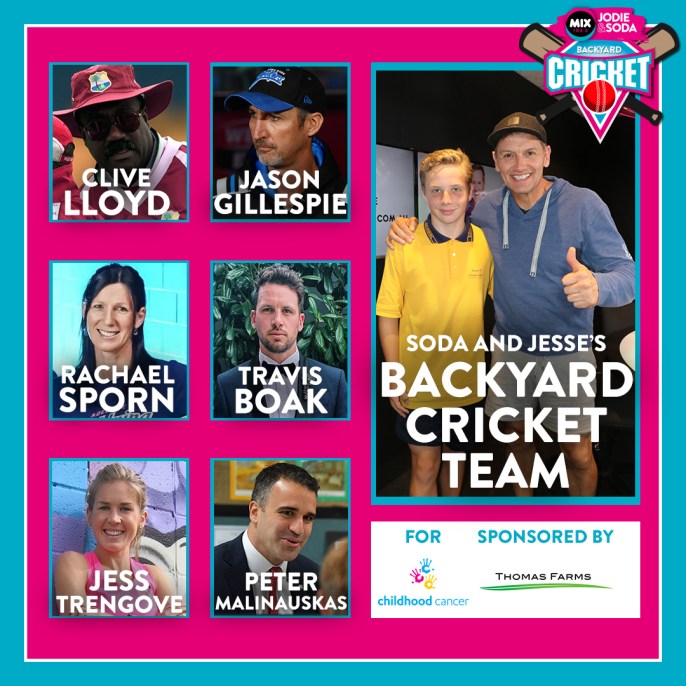 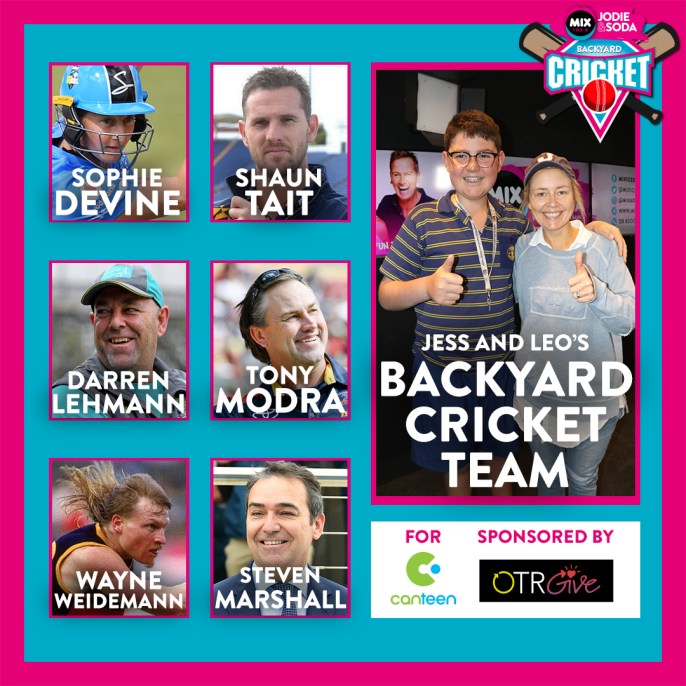 Advertisement
Advertisement
Want more? Listen to one of our favourite moments from The Ali Clarke Breakfast Show – Tune in weekdays from 6AM on Mix102.3!
backyard cricket clive lloyd darren lehmann