There were lots of tears in the Mix102.3 studio this morning as Holly’s parents, Alice and Mark, recounted to Jess Adamson and Mark Soderstrom the seven months of treatment that Holly endured, the pain they all suffered, and the devastating final moments as they said goodbye to their precious girl. Listen to it below…

“Our daughter Holly was born in 2012, a beautiful little girl, after our two lovely sons were born,” Alice started.

“When she was three months old we noticed some bruises on her. We weren’t sure what was going to on and we took her to the doctors and were told to keep an eye on them.

“Over the next few days these bruises appeared more and more all over her body so we took her to the emergency up at Flinders and we were told what you don’t want to hear – that we believe your daughter has leukaemia. We were transferred to the Women’s and Children’s and we started treatment there straight away. 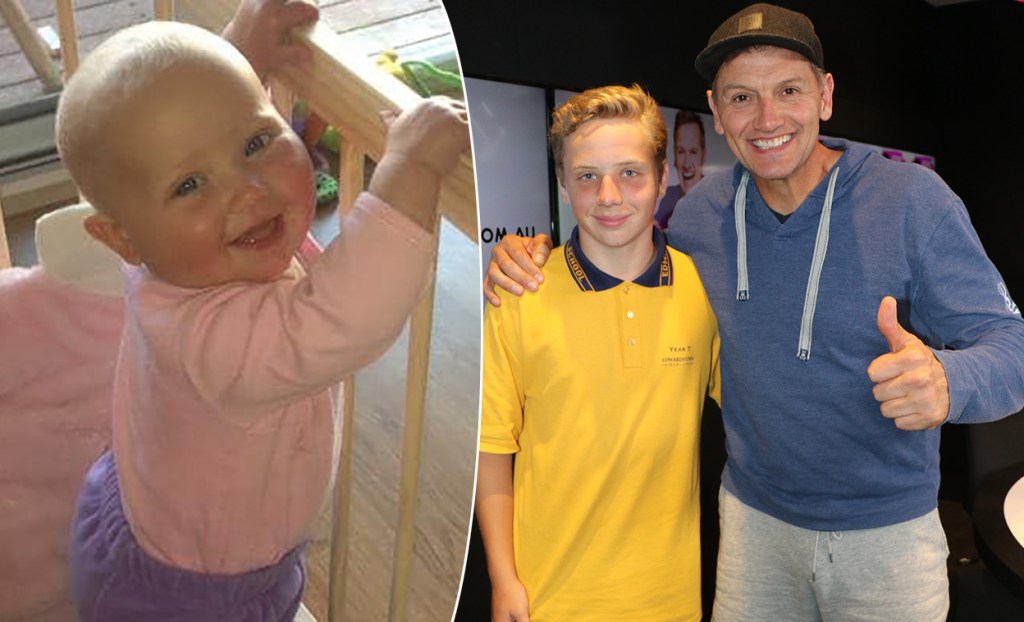 Soda and Jesse Pannenburg will honour Jesse’s sister Holly, who died from leukaemia at just 11 months of age, when they team up to play backyard cricket at Government House.

“Jesse was only 6 at the time and Max, our other son, was 4, your world is turned upside down. It was scary, I can’t begin to explain how we were feeling at the time. It was just the most horrible situation to be in. And that’s when we first met the people from Childhood Cancer Association.

“They introduced themselves and immediately we felt a sense of relief that we had someone on board that could explain things to us and support us and our children in this journey that we had ahead of us.”

Alice and Mark were told they had been more likely to win lotto than have a baby diagnosed with such a rare form of leukaemia.

She endured seven months of intensive chemotherapy treatment. At every turn she seemed to suffer the ‘rare’ side effects that doctors were not expecting her to have to deal with. Yet she continued to smile when she saw her family, the hospital staff, Childhood Cancer Association representatives, and especially her big brothers.

“She was amazing, she was always just our beautiful little girl,” Alice said.

“I remember looking at her thinking you’re just a little baby and trying to explain to her why she was in pain and feeling sick, and I remember just looking into her eyes and it was like she understood that this (treatment) is all happening to help her. She was an amazingly strong little girl.

“I think he happiest moments where when Mark would bring the boys in. No matter what she’d been through, if she’d been really sick or not sleeping as soon as they’d walk in that was the best medicine, having her brothers come in and see her.

“We’re just so proud of her and so proud of the boys for managing that as well. Because they saw her at the absolute worst of times.”

After chemotherapy ran its course over many months, the whole family had committed to move to Sydney for close to a year so that Holly could have a bone marrow transplant, as she continued to fight for her life.

Brother Jesse was going to be her donor.

“She had her last round of chemo leading up to the transplant, and all went well (but) her immune systems were down, she had nothing left,” Alice said.

“Then she got a cold and that turned into pneumonia. So then we went into intensive care with her, they had to help with her breathing and everything.

“The doctors said we need to put her on the ventilator just to give her little body a rest. I remember that really clearly because I remember sitting in this room with no windows with my little baby hooked up to everything and telling myself I think she’s getting better, this is going to be alright, we’re going to go to Sydney, this is going to all be OK.

“I remember they were wheeling her out to take her to the other space in intensive care to hook her up to all these machines. This is a little girl who couldn’t breath, with no energy left, hasn’t eaten in days and with all the wires hanging out from her she stood up on the bed to give me a big cuddle and I remember saying ‘Holly I love you but you’ve got to rest baby’ and I gave her a big hug and laid her down on the bed.”

Holly continued to deteriorate over the next four days while on the ventilator.

“We were told that if she pulled through and came out of it she wouldn’t be the same little girl, that she would have lots of special needs and the chances of her making it through the transplant would not be great,” Alice says.

“Then the decision was made to let her go to sleep.

“We took her off the machine and had the boys come in and people from Childhood Cancer were there with us and I held her and we sang to her and we gave her kisses and she went to sleep.

“That’s what we told the boys, that she went to sleep and she went over the rainbow where she could not be sick anymore and not be in pain.”

The Pannenburgs continued to be supported by the Childhood Cancer Association throughout their intense grieving.

More than six years on, they still try to do all they can to support the charity that supported them when they needed it most.

He sat in front of his entire school at Edwardstown Primary, with tears streaming down his face, such was the intensity of the occasion.

The community had rallied around his cause so strongly that he had managed to raise $16,000 for the Childhood Cancer Association.

All in Holly’s honour.

Soda decided it was time we at Mix102.3 did something back for Jesse and the Pannenburgs, and when he heard about Jesse’s love of cricket, the idea for SA’s Greatest Ever Game Of Backyard Cricket was born.

Jesse and Soda’s Childhood Cancer Association team will take on Jess’s team with a captain from Canteen. The full teams and details will unravel on Mix102.3 across the next two weeks before the big match on Thursday 28 November, the day before the test match starts at Adelaide Oval.

The Grandmother Who Became A Sex Worker: Jess And Soda’s Uncut Interview