Her first was at school when she collapsed to the ground, after grabbing at her head. Then, just hours after being sent home from hospital, she suffered a second stroke which severely impacted her right side, leaving her unable to walk and talk. 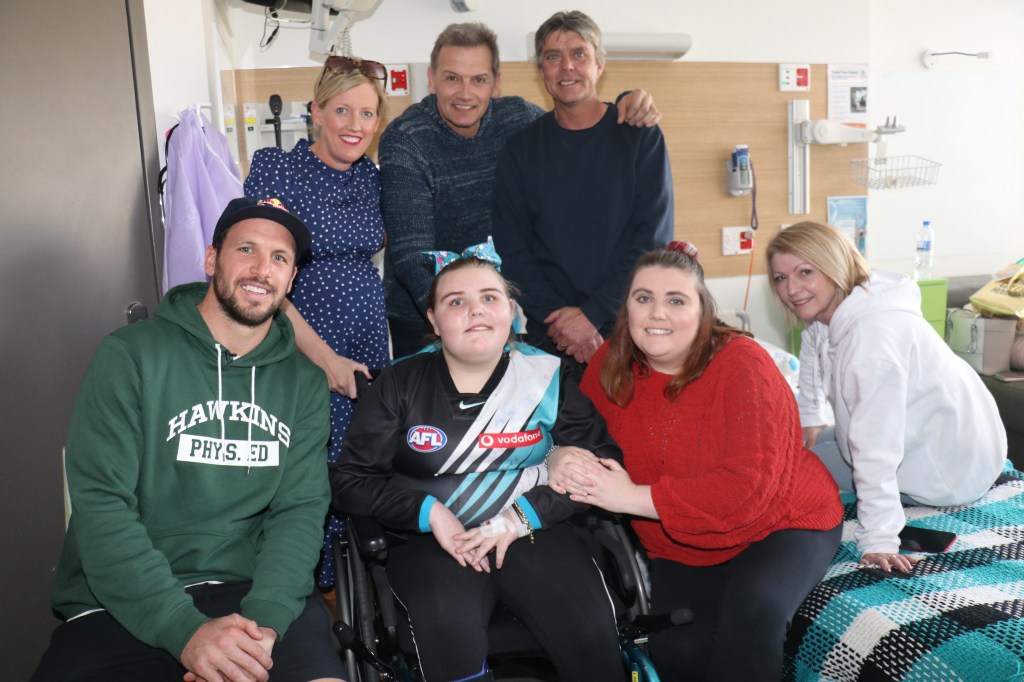 Two months on, she is making huge progress. She can take some steps, and is talking more and more thanks to one particular song.

Lily’s first words after her strokes were while she was Facetiming her grandparents from a Power game at Adelaide Oval, singing along to the Power’s pre-game anthem, ‘Never Tear Us Apart’.

Now, she can sing it all.

Watch the video above as Jodie, Soda and Boaky break the news to Lily and mum Mel that they will be attending the Port Adelaide v Sydney game on Saturday from a corporate box then join her in singing ‘Never Tear Us Apart’.

Lily made it to the footy! ❤️After two strokes and two months in hospital, no-one deserved to see the Power win more than Lily (and her mum Mel). So glad we could help and special thanks to @adelaideoval, @travisboak10, and @pafc. #jodieandsoda #jodieandsodarescue

Not only did Lily get to see the Power beat the Swans convincingly and sing her favourite song but she also met a lot of the Power players at training the day before the game, and again after the game.

Charlie Dixon helped get her new guernsey signed by the team and her new favourite player Connor Rozee visited her in hospital as well.

Mum Mel told Jodie and Soda on Monday the game was awesome for the whole family, especially Lily.

“It was so nice to see the big bright smile on her face and so she could sing it with the rest of the crowd,” Mel said.

Mel wrote on Instagram: “I can’t thank you all enough for doing this all for Lily. She had such a wonderful time at the footy, was able to sing NTUA nice and loud and so happy to see the boys get a win on the weekend! Thank you #jodieandsodarescue @travisboak10 @pafc and @adelaideoval for making this possible for Lily 😊 🔵⚫️⚪️🍐🍐🍐”

Lily’s story was told in depth on Channel 7’s Today Tonight which you can watch in full below.

What a day and what a game!! So glad to see the Power boys get over the line today and what a great game for Lily to go to for her first game back!! She was so excited to see @charlie_dixon and @connor_rozee again today. Thank you for coming over to see Lily tonight! 🔵⚫️⚪️🍐🍐🍐 #WeArePortAdelaide #LilyGrace #LilyGraceWarrior #YouGotThisLily #StrokeSurvivor #AdelaideOval

Want more? Listen to one of our favourite moments from The Ali Clarke Breakfast Show – Tune in weekdays from 6AM on Mix102.3!
afl jodie and soda jodie and soda rescue port adelaide football club travis boak

“You’re Better Off Going To Prison”: The Truth Behind Reality TV