But nothing says ‘Royal Adelaide Show’ more than kids emptying a showbag onto the floor and opening as much as they can before Mum and Dad stops them.

That’s what happened this morning in one of the pavilions at the Wayville Showgrounds when the Royal Show unveiled its range of 2019 showbags.

Watch the video above as some of Adelaide’s luckiest kids test the Royal Show’s 2019 Showbags.

Mix102.3 breakfast hosts Jodie and Soda got to open the doors for the kids, who were especially chosen as this year’s ‘showbag testers’.

Ashton from Kangarilla Primary School was front and centre after he won Mix102.3’s competition to design a showbag, which meant his entire class got to be the first to road test the showbags.

Camp Quality were also there, putting a smile of the faces of kids who had been affected by cancer.

Headlining the new showbags for 2019 was ‘Harry Potter Charms’, which is priced at $28, while some will be surprised to see ‘Stranger Things’ and ‘Riverdale’ both make their way from Netflix to the showbag stall!

There’s a new Kinder Surprise Showbag which costs just $10, and there’s also a ‘retro’ version of the infamous Bertie Beetle Bag this year.

At the top end of the scale, the ‘Lindt – Box Of Blocks Showbag’ will set you back a whopping $95.

Watch the video below as Soda takes us through the new Showbags at the 2019 Royal Adelaide Show. 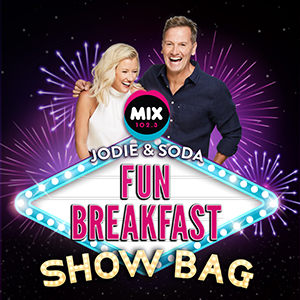 But for the best showbag of all head straight to the Showbag Hall to grab the ‘Mix102.3 Jodie and Soda’s Fun Breakfast Showbag’! For just $30 it contains 20 items including a mini Bluetooth speaker, mobile phone charger, reusable coffee cup, water fan, trucker cap, drawstring bag, and two balm balls.

Mix102.3 have a huge stack of Royal Show tickets to give away starting next week.

Jodie and Soda will be broadcasting live from the Show on the opening morning, with hundreds of opportunities to join them live then enjoy the day at the Show with your own Jodie and Soda Showbag.

Check out the full range of 2019 Showbags at the Royal Adelaide Show website here.