Meat and Livestock Australia have revealed their new Ad campaign hilariously showing Australian political leaders sharing a lamb chop. And how else would they share a chop than intimately.

Our own Premier Steven Marshall is seen chomping into the steaming lamb chop with Victoria’s Premier Dan Andrews. The mural will be displayed in Melbourne and at the border between the two states.

In an aim to bring together the somewhat segregated states, these murals are sure to bring a smile to anyone’s face.

Other murals posted around Australia will include Prime Minister Scott Morrison and WA Premier Mark McGowan tucking into the freshly cooked chop. 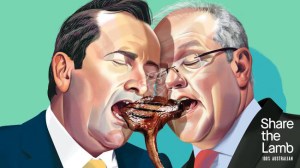 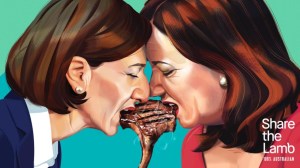 And Ms Berejiklian and Victorian premier Daniel Andrews nibbling away. 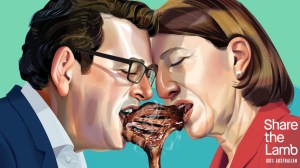 Really, what else could bring our national leaders together than a classic lamb chop?

MLA domestic market manager Graeme Yardy said to The Australian “If there’s anyone who could really use a delicious lamb meal together, it’s probably our state leaders and Prime Minister. We’d love them to bring a little more unity to the country and lamb would be a good vehicle for that.”

“We feel we captured the tone of the country really well in that ad,” Mr Yardy said. “It’s been a tough year for Australians and we needed a laugh. We hope this whole campaign draws a laugh and we can come together as a country.”

What are your thoughts on the new murals?

Advertisement
Advertisement
Want more? Listen to one of our favourite moments from Erin Phillips & Soda – Tune in weekdays from 6AM on Mix102.3!
Australian Lamb national leaders pollical leaders