Thieves have carried out a heist at Dresden’s Green Vault, one of the world’s oldest museums, making off with three “priceless” sets of jewelry from the 18th century that German officials said would be impossible to sell on the open market.

Police said they were alerted shortly before 5am (local time) to a break-in at the museum and officers arrived at the scene within minutes. No suspects have yet been detained but authorities are reviewing footage captured by security cameras.

It is believed the thieves may have cut power to the building, before smashing through a window to access the vault in what could be the most costly post-war art theft in history, local media has reported.

The treasury of Augustus the Strong of Saxony was established in 1723 and today contains around 4000 objects of gold, precious stones and other materials on display in the historic palace.

Authorities said it appeared the thieves had broken open only one glass case containing three sets of Baroque jewelry made up of dozens of gems each. 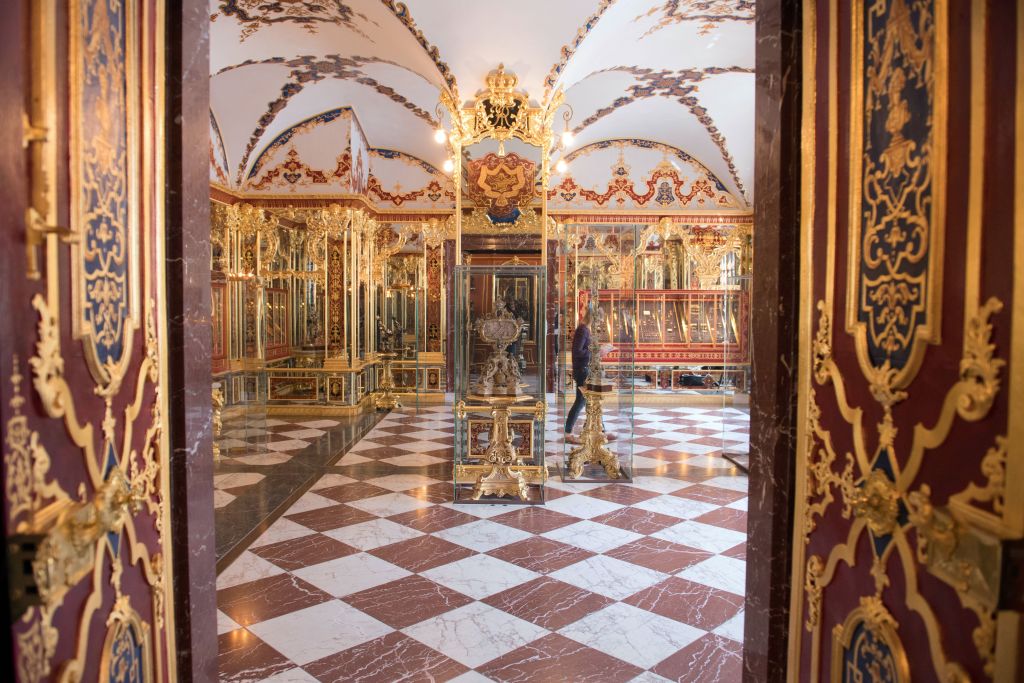 The Jewel Room ( Juwelenzimmer), one of the rooms in the historic Green Vault (Gruenes Goelbe) at the Royal Palace in Dresden. Getty Images

German media reported the losses from the early-morning burglary could run into the high hundreds of millions of euros, but the director of Dresden’s State Art Collections, Marion Ackermann, said it was impossible to estimate the value of the items.”We cannot give a value because it is impossible to sell,” she said, appealing to the thieves not to break the ensembles into pieces.

Some reports estimate the heist at over $1bn dollars.

“The material value doesn’t reflect the historic meaning,” she said.

The governor of Saxony, where Dresden is located, said the treasures in the vault contained items collected over many hundreds of years.”It’s not just the State Art Collections that was robbed, but us Saxons,” Michael Kretschmer tweeted.

“One can’t understand the history of Saxony without the Green Vault.”Saxony’s interior minister, Roland Woeller, told reporters that multiple burglars forced their way into the building in the early morning hours.

“This is a bitter day for the cultural heritage of Saxony,” he said.

The thieves “stole cultural treasures of immeasurable worth — that is not only the material worth but also the intangible worth to the state of Saxony, which is impossible to estimate.”

Woeller said police had already set up a special team of investigators to pursue the case.

“We will do everything in our power not only to bring the cultural treasures back, but to capture the perpetrators,” he said.